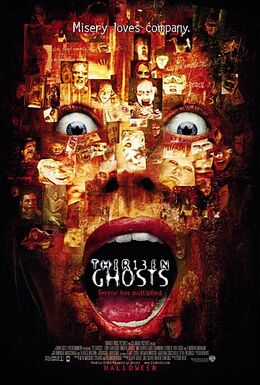 Thirteen Ghosts (also known as 13 Ghosts and stylized as Thir13en Ghosts) is a 2001 American horror film directed by Steve Beck. It is a remake of the 1960 film of the same name by William Castle.

Ghost hunter Cyrus Kriticos (F. Murray Abraham) and his neurotic psychic assistant Dennis Rafkin (Matthew Lillard) lead a team on a mission to capture a spirit, called the Juggernaut, in a junkyard. Several of the men are killed during the ensuing capture, including Cyrus himself. However, the team is able to catch the ghost.

Arthur Kriticos (Tony Shalhoub), an embittered and naïve mathematician who is also a widower, is informed by the estate lawyer of his uncle Cyrus, Ben Moss (JR Bourne), that he has inherited a mansion. Arthur and his financially-insecure family plan to move into this mansion with his two children, Kathy (Shannon Elizabeth) and Bobby (Alec Roberts). Their babysitter/nanny, Maggie, (Rah Digga) accompanies the family.

Dennis Rafkin, disguised as a power company employee, meets the family and Moss as they tour the mansion. The residence is made almost entirely of glass and metal frames. It contains Latin phrases etched on floors and movable glass walls, along with many priceless artifacts. Arthur and his family are eager about inheriting this new home, and while Arthur is discussing financial matters with the attorney, Kathy and Bobby venture off on their own to explore the mansion. After seeing several ghosts in the basement, Dennis frantically runs upstairs to warn Arthur about the home he is about to own. Moss assures Arthur that Dennis is crazy and should be ignored. Dennis tells Arthur that there are twelve spirits imprisoned in the house, held captive by the spells written throughout the residence on the glass.

Ben Moss is seen sneaking off to collect a valise or suitcase of money, which was intended to be payment. However, upon taking the money, he activates a mechanism set up by Cyrus that seals the entrance and releases the ghosts, one by one. Consequently, Moss encounters the first one to be released, the Angry Princess, and backs up into an open doorway, which snaps shut and slices him in half. Later, the existence of the ghosts is proven to the skeptical Arthur, when he witnesses an attack on his daughter by the ghost known as the Jackal.

Bobby, the younger brother of the two children, disappears after getting separated from Maggie and he wanders into the basement. There he encounters several spirits, including the Torso and the Bound Woman. Arthur manages to find Kathy, and the two battle the Jackal. Kalina Oretzia (Embeth Davidtz), a spirit liberator, helps Arthur free Kathy from the Jackal's grip, only to be lost again a few moments later. After this, Arthur's objective is clear -- to find his children and leave this house as soon as possible. This becomes problematic for two reasons: only those equipped with special glasses are able to see the ghosts; and the walls continue to shift, making navigation difficult.

Arthur and Kalina then meet up with Dennis and Maggie and set off for the library, as it is protected and never shifts. Dennis falls behind, though, hindered by one of his psychic visions. He comes to just in time to see the Jackal attack Arthur. Dennis is able to toss one of Kalina's flares at the Jackal, knocking the ghost off Arthur who is wounded.

In the library, Kalina explains that this is not a house - it is a complex machine built by Cyrus, designed by a possessed 15th century astronomer to open the "Ocularis Infernum" (Eye of Hell). Created by the Devil and powered by the dead, and once this demonic device opens the Eye, the Eye would allow its user to see everything in the past and future, Heaven and Earth, the blessed and the damned. To Arthur's horror, he discovers the fourth ghost powering this machine is the spirit of his dead wife, Jean. Kalina goes on to tell Arthur that his children are in grave danger, and the only way to ensure their successful return is to offer his soul in exchange. If Arthur takes his place as the 13th ghost, his sacrifice of pure love would combat all of the evil contained within the machine, thus shutting it down.

Arthur and Dennis make another attempt to save Kathy and Bobby, using a detached pane of glass as a shield against the ghosts' attacks. First facing the Torn Prince as he's unleashed and then the Hammer, causing Dennis to push Arthur into a corner where he is then protected by the glass, sacrificing his own life in the process. After combating and evading some of the Hammer's attacks, Dennis finds himself cornered by the angry spirit and the newly-released Juggernaut; he is brutally beaten and is killed when the Juggernaut breaks his back against a metal pole.

Cyrus is revealed to be alive, having faked his death in order to lure Arthur to the house; Kalina turns out to be his secret partner and lover, and knocks Maggie unconscious. Cyrus has orchestrated the previous events, including the abduction of Kathy and Bobby, so that Arthur will become the 13th ghost not to stop the machine, as Kalina had claimed, but to trigger it. Kalina says the only flaw in the plan is that Arthur will only sacrifice himself if his children are really in jeopardy. When she balks at Cyrus's order to make it so, Cyrus sighs and traps her in a small chamber, telling her that "greatness requires sacrifice", just before she is crushed to death between two glass walls.

Trapped behind the ectobar glass, Arthur is visited by Jean's ghost. Then, all the ghosts disappear from the basement, responding to a tape-recorded summoning spell played by Cyrus. Kathy and Bobby have been placed at the center of a set of whirling, razor-sharp rings. Arthur and Cyrus have a violent confrontation, which is interrupted when Maggie removes the tape and messes up the machine. Due to this breakdown in equipment, the ghosts are released from their trance, and the machine begins to malfunction. All the ghosts, except Jean, immediately grab Cyrus, and hurl him into the spinning rings, slicing him to pieces. Dennis' ghost then appears, telling Arthur to go to his kids. Waiting for a break in the razor rings after the malfunction caused by Maggie, Arthur jumps to save his children, making the leap without dying. The house's glass walls shatter, releasing the spirits from captivity. A peaceful-looking Jean lingers briefly to say goodbye to her family, then departs with the others.

The film ends with a battered Maggie walking through the wreckage, yelling out to Arthur and the kids that she did not agree to this when she came to work for them, and that she is quitting.

Similarities with the Original