The Torso is the ghost of Jimmy "The Gambler" Gambino, and the second ghost to be featured in The Black Zodiac.

Jimmy Gambino was obsessed with gambling, and would spend his days at the track instead of at school, and his nights gambling in seedy bars. Jimmy eventually opened his own booking business, though he was barely able to make his payoffs because of his compulsive gambling and he quickly developed a reputation due to his refusal to turn down a bet.

Jimmy's inability to turn down a bet eventually caught the attention of mobster and "made man" Larry "Finger" Vatelo, who bet heftily on a boxing match. Jimmy agreed, and sealed his fate. When Jimmy's fighter was defeated, he fainted.

When Jimmy awakened, Larry and his gang arrived to collect Larry's winning from Jimmy. But because Jimmy was cleaned out, instead, they cut Jimmy's body up, wrapped the pieces in cellophane and dumped them into the ocean.

Following his death, Jimmy's spirit remained bound to earth, and was captured by Cyrus Kriticos to become The Torso. The Torso was then moved to the basement of Basileus's Machine with the other eleven ghosts.

The Torso is the fourth ghost to be released. He appears before Bobby Kriticos in the basement, scaring him off.

Later, a Latin chant causes The Torso, along with the other eleven ghosts, to go to the center of the machine and power it up. When The Torso and the other ghosts are freed from Cyrus's trance, they throw Cyrus into a rotating crest of rings. The house then explodes, destroying its walls and freeing all the ghosts. 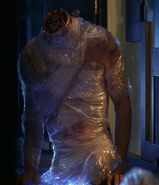