The Torn Prince is the ghost of Royce Clayton and the fifth ghost to be featured in The Black Zodiac.

Royce was born in 1940, and was discovered to be a gifted baseball player in high school, despite his attitude problems and superiority complex. As a destined, all-star player, he was offered first-class scholarships from various colleges, all of them offering him the best opportunity to leave his small town life.

However, fate threw a curve ball when Royce was 17, Johnny, a greaser that challenged him to a drag race, but unbeknownst to Royce, had cut a brake line in his car prior to the event. This, of course, caused Royce to lose control of the car; resulting in an accident which tore a large amount of flesh off of his chest, as well as the right side of his face. This incident quickly ended Royce's life.

Royce's body was buried in a plot of earth overlooking the local baseball diamond where he played at. Following Royce's death, his spirit remained bound to earth, and was later captured by Cyrus Kriticos to become the Torn Prince. The Torn Prince was then moved to the basement of Basileus's Machine with the other eleven ghosts.

When Arthur and Dennis try to get through the house to the basement, the Torn Prince is the eleventh ghost to be released. He viciously attacks the two, but they use a detached wall as a shield against his attacks. However, when the Torn Prince doesn't give up, the two use the pane to ram him into another wall, defeating the ghost. 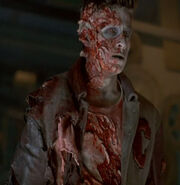