The Juggernaut is the ghost of Horace "The Breaker" Mahoney and the twelfth ghost to be featured in The Black Zodiac.

Horace was abandoned by his mother, almost immediately after birth, and was raised by his father. As a child, Horace grew to such a grotesque height and appearance that he was constantly ostracized and spent his childhood as an outcast.

Mr. Mahoney put Horace to work at his junkyard, chopping and crushing up old cars. When Mr. Mahoney died, Horace was left alone and finally, with no one to guide him, went insane as a result. He became a serial killer, picking up hitchhikers and stranded motorists to take back to his junkyard; there, he would rip them apart with his bare hands and feed their remains to his dogs. This preferred method of murder was what earned him the nickname, "The Breaker".

Horace's seventh to-be victim turned out to be an undercover police officer, who had a SWAT team surround the junkyard and arrest Horace. However, Horace was able to break free of his handcuffs and killed three police officers before he was gunned down by five SWAT officers. They then added one final volley of shots into him, "just to be sure" that he was dead.

Following his death, Horace's spirit remained bound to earth and haunted the junkyard, brutally killing anyone who entered. This caused the junkyard's death toll to rise to over forty by 2001.

Cyrus Kriticos and his team, including Dennis, arrive at the junkyard sometime in 2001 to capture Horace's ghost to become the Juggernaut. They use blood and a tape-recorded Latin chant played across a megaphone to successfully draw The Juggernaut into a containment cube, but not before he savagely and brutally kills much of Cyrus's team, but was not able to kill Dennis.

The Juggernaut was then moved to the basement of Basileus's Machine with the other eleven ghosts. He is the twelfth and final ghost to be released, and once he is, he joins the Hammer in the attack on Dennis. Once the two overpower Dennis, the Juggernaut brutally finishes him off by breaking his back against a wall. 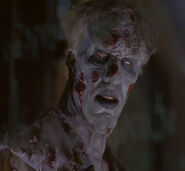