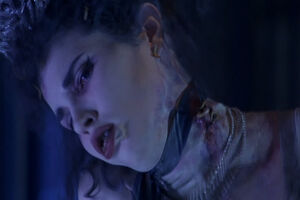 The Bound Woman is the ghost of Susan LeGrow and the third ghost to be featured in The Black Zodiac.

Susan LeGrow had a privileged life and was a member of her school's cheerleading squad. Her parents were the richest people in town, thus instantly making her the most popular girl at her school. However, Susan also had a defining flaw: her treatment of men. She used her beauty to flirt and toy with them, leaving many men heartbroken. Her friends warned her she would regret it someday, but she didn't listen to them.

During her Senior year, Susan dated the captain of the school football team, Chet Walters. When Chet caught Susan with another boy on Prom Night, he angrily clubbed Susan's new boyfriend to death and tied Susan up. He then killed her by strangling her with his tie and breaking her neck and buried her body under the 50-yard line of the school football field.

Susan's buried corpse was discovered two weeks after her death. Following her death, Susan's spirit remained bound to earth and was later captured by Cyrus Kriticos to become The Bound Woman. The Bound Woman was then moved to the basement of Basileus's Machine with the other eleven ghosts.

The Bound Woman is the third ghost to be released. Right after her release, The Bound Woman haunts Bobby and lures him into the basement, and approaches him from behind, haunting and scaring him away.

Retrieved from "https://13ghosts.fandom.com/wiki/The_Bound_Woman?oldid=7668"
Community content is available under CC-BY-SA unless otherwise noted.