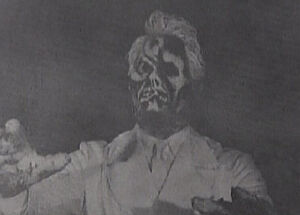 When Dr. Plato Zorba discovered the supernatural world, he traveled around the world, collecting eleven earth-bound souls and trapping them in his mansion for experiments with the supernatural. Eventually, Dr. Zorba began converting stocks and real estate into cash and hid the treasure of money in his house, to the disgust of his servant, Elaine Zacharides.

While he was sleeping one night, Dr. Zorba's friend, Ben Rush, killed him by crushing him with the falling roof of his canopy bed, suffocating him. Dr. Zorba's soul then became the twelfth ghost bound to the house, unable to move on until a thirteenth ghost was created.

After Dr. Zorba's death, his nephew Cyrus and his family inherit his mansion and move in. Eventually, Elaine has a seance with the family to try and contact Zorba. Dr. Zorba's ghost temporarily possesses Cyrus, and unsuccessfully attempts to warn the family through cryptic messages about Ben, and that Dr. Zorba and the other eleven ghosts need a thirteenth ghost to move on.

That night, Ben takes Buck to Dr. Zorba's old room and tries to kill the boy with the crushing canopy bed. However, at that moment, Dr. Zorba's ghost appears to Ben and takes his revenge by forcing Ben under the crushing bed in Buck's place, killing him.

Dr. Zorba and the other eleven ghosts then presumably crossed over when Ben became the thirteenth ghost.

Retrieved from "https://13ghosts.fandom.com/wiki/Plato_Zorba?oldid=7666"
Community content is available under CC-BY-SA unless otherwise noted.