Maggie Bess was hired by Arthur Kriticos as a nanny for Bobby and Kathy, and gets along well with Bobby.

After Arthur's wife, Jean was killed in a house fire and the family was left all but penniless, Maggie was hired as a nanny for Kathy and Bobby.

While Maggie and Dennis search the basement, Dennis gives Maggie a pair of spectral viewers with which to see the ghosts locked up in the containment cubes in the basement. After several close run-ins with the rampant ghosts, Dennis and Maggie meet back up with Arthur and Kalina and escape to the safe library.

Dennis and Arthur plan to search the house for the missing Kathy and Bobby one last time, while Maggie and Kalina go to the core of the machine to shut it down. There, Maggie meets the actually-alive Cyrus. Kalina then reveals her true colors by hitting Maggie over the head with The Arcanum, knocking her out.

Maggie later recovers and scrambles the machine's controls, causing it to overload and explode. Maggie survives the explosion, and is left wandering through the wreckage of the house, screaming that she quits her job as the family's nanny, as everything she went through was not in her job description. 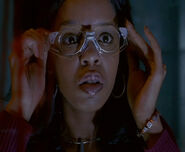