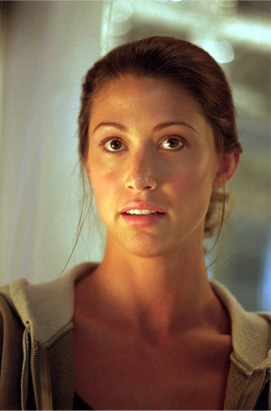 Kathy Kriticos is the only daughter of Jean and Arthur Kriticos, and the elder sister of Bobby.

Kathy is the sister of Bobby, whom she loves very much. However, one night, Kathy and Bobby's mother Jean was horribly burnt by a fire when a stray log rolled out and set the Christmas tree alight; quickly starting a house fire, and later died in hospital from her injuries. Kathy and her family were deeply heartbroken by this, and were forced to move to a cramp apartment, and hire Maggie Bess as a nanny.

One day, however, Cyrus's lawyer, Ben Moss, visits them with news that Arthur's uncle, Cyrus has been seemingly killed, and that they have inherited his mansion. That night, Kathy and the family move into the mansion, fascinated by its advanced technology and other features. They also meet a power company employee at the house, claiming that the house is draining its power from all the others in the area.

When Bobby goes missing, Arthur and Kathy search the basement for him, but only find his box recorder and spectral viewers. Kathy puts the viewers on, and just as she sees The Jackal right in front of her, the ghost attacks her, clawing at her flesh and ripping her clothes apart. However, at that moment, Kalina arrives and frees Kathy from The Jackal's grip. Kathy, Arthur and Kalina flee through the basement from The Jackal, until a sliding glass wall separates The Jackal from them.

While Arthur and Kalina are distracted, Kathy is abducted and taken to the center of the machine alongside Bobby as bait to pressure Arthur into becoming the thirteenth ghost. When the machine then begins to malfunction, Arthur waits for a break in the crest of razor rings around his children before leaping to them. The house then explodes, and Arthur confesses to Bobby and Kathy that he didn't know they would be protected, and just wanted not to lose them. The three are then visited by Jean's ghost one last time.

Retrieved from "https://13ghosts.fandom.com/wiki/Kathy_Kriticos?oldid=7447"
Community content is available under CC-BY-SA unless otherwise noted.