Jimbo is a man that worked at the carnival that Margaret Shelburne and Harold Shelburne where staying at.

Jimbo was a carnival barker who hired Margaret Shelburne as a part of his travelling freak show. When Margaret's son, Harold, gruesomely killed the freaks responsible for his mother's recent death and put them on display for the paying customers to see, Jimbo had a mob punish Harold by ripping him apart/having him mutilated.

It's unknown if he came back as a ghost or moved on.

Due to his Negligence and stupidity, He caused the suffering and deaths of Margaret Shelburne and Harold Shelburne. 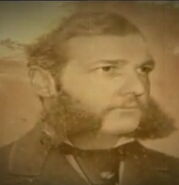