Dennis Rafkin was a powerful-yet-neurotic psychic who helped Cyrus Kriticos capture the first twelve ghosts in The Black Zodiac.

Dennis was a psychic and, according to the script for Thirteen Ghosts, was ostracized by everyone for his abilities. At some point, he met Cyrus Kriticos, who accepted him and offered to pay him to use his psychic abilities to help Cyrus capture twelve ghosts bound to earth. However, Cyrus ended up stringing Dennis along, never paying him the money he owed him.

While capturing The Juggernaut, the twelfth and final ghost, Cyrus and all of his team except Dennis are apparently killed and Dennis demands Ben Moss for the payment Cyrus owed him.

Some time later, Cyrus's nephew, Arthur Kriticos, hears he has inherited Cyrus's mansion, and he and his family visit the location to look over it. Posing as a power company employee to get into the house and find his promised payment, Dennis shows up to meet them and search the basement. During the search, he has a psychic episode. Realizing that there are supernatural presences in the basement, Dennis puts on his spectral viewers and sees the captured ghosts trapped in it.

Dennis freaks out and tries to warn Arthur and Moss, but the two refuse to believe him. Dennis then has another episode, and when Arthur tries to help him, Dennis sees Arthur's memories and realizes that when the fourth ghost (whom Dennis himself had helped capture) was alive, she was Arthur's wife. However, Dennis keeps quiet about this at the time.

When a reluctant Dennis searches the basement with Maggie, he proves the existence of the ghosts to her and finds that several ghosts have been released. After several close run-ins with the rampant ghosts, Dennis and Maggie meet back up with Arthur and Kalina and escape to the safe library. There, Kalina reveals who the fourth ghost is, and Arthur and Dennis decide to take one last look around the mansion, using a detached pane of ectobar glass as a shield against the attacking ghosts.

When Dennis meets The Hammer in his containment cube, he uses an obscene gesture toward him which causes the Hammer to retreat and give Dennis a vision of his death. Now at peace with himself, Dennis forces Arthur into a corner, protected by the ectobar glass when the Hammer later attacks them. He distracts the Hammer, dodging his attacks, but at that moment, the newly-released Juggernaut arrives, and the two ghosts overwhelm Dennis. The Hammer now beats Dennis to the floor before the Juggernaut finishes him off by breaking his spine on a corner of the house.

After events lead to the machine malfunctioning, Dennis's spirit appears to Arthur, telling him to go to his kids. Dennis watches Arthur jumping to them safely as it finally explodes, leaving them unharmed. His spirit eventually departs from the house.

Rafkin possesses psychic skills which make him sensitive to psychic activity, particularly ghosts and haunting activity. Unfortunately, he doesn't seem to have a strong control over these abilities. Particularly violent psychic energies or sudden feedbacks of psychic memories can result in him having seizures. He also possesses the ability of psychometry, giving him the ability to "read" a person's life by touching them. He can also feel the history of small areas of ground by touch, such as when he felt the history of murders committed by the Juggernaut in the junkyard. He can also detect the existence of ghosts in any given area, but he cannot physically see them. He requires the use of special glasses to see ghosts in their invisible state. 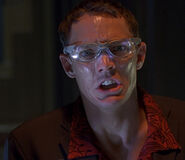