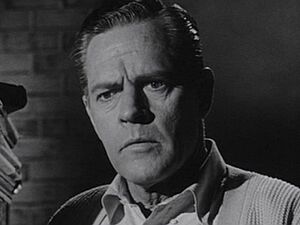 Cyrus Zorba is the father of Buck and Medea, the husband of Hilda and the nephew of the late Dr. Plato Zorba. He, along with his family, inherited his uncle's old mansion, inhabited by twelve, violent ghosts.

One night, Elaine convinces Cyrus, Hilda and Medea to join her and have a seance. During the seance, Plato's ghost temporarily possesses Cyrus, and through him, uses cryptic messages to try and warn the family that the other eleven ghosts will try to make one of them the thirteenth ghost needed to free them from the house. However, Cyrus and the family fail to crack the code.

The day after Ben Rush is killed trying to murder and silence Buck from revealing the house's hidden treasure of money, Cyrus and his family discover the money, and consider using it to move to another house.

Retrieved from "https://13ghosts.fandom.com/wiki/Cyrus_Zorba?oldid=7697"
Community content is available under CC-BY-SA unless otherwise noted.