Chet Walters was a double murderer, who killed Susan LeGrow, along with another man she was seeing behind his back.

Chet was eventually caught after Susan's buried body was found two weeks later. He was arrested, convicted and sentenced to death, His last words were, "The bitch broke my heart, so I broke her neck."

Susan LeGrow's ghost was later captured by Cyrus Kriticos to become "The Bound Woman" in The Black Zodiac, a collection of 12 earthbound spirits, as listed in The Arcanum, needed to power Basileus' Machine and open the Ocularis Infernum. 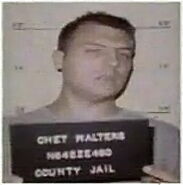