Bobby was the son of Jean and Arthur Kriticos, and the brother of Kathy

Bobby is the little brother of Kathy, who loved him very much. However, one night, their mother Jean was horribly burnt by a fire caused by a stray log from the fireplace alighting the Christmas tree, and later died in hospital. Bobby and his family were deeply heartbroken by this, and were forced to move to a cramped apartment, and hire Maggie Bess as a nanny. Luckily for Bobby though, he got along well with Maggie.

One day, however, the family lawyer, Ben Moss, visits them with news that Arthur's uncle, Cyrus had been seemingly killed, and that they had inherited his mansion. That night, Bobby and the family move into the mansion, fascinated by its advanced technology and other features. They also meet a supposed power company employee, Dennis Rafkin, at the house, claiming that the house is draining its power from all the others in the area.

While Bobby and Maggie are exploring the house, the two are separated. Hearing someone calling him, Bobby wanders down into the basement to investigate, thinking it is just a prank by Maggie, and encounters several spirits which scare him, including The Bound Woman and The Torso. He also meets his mother's ghost, who begs him to go and find Arthur and Kathy. However, at that moment, the actually-alive Cyrus attacks and abducts Bobby from behind. Bobby is taken to the centre of the machine alongside Kathy as bait to trick Arthur into becoming the thirteenth ghost.

When the machine begins to malfunction, Arthur waits for a break in the crest of razor rings around his children before leaping to them. The house then explodes, and Arthur confesses to Bobby and Kathy that he didn't know they would be protected, and just wanted not to lose them. The family are then visited by Jean's ghost one last time. 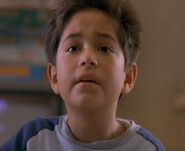