Benjamin Moss was the estate lawyer of Cyrus Kriticos.

When Cyrus was apparently "killed in an accident", Moss visits Cyrus' nephew, Arthur, to inform him that he and his family have inherited Cyrus' mansion. That night, Moss takes Arthur and his family to the mansion, where they meet Dennis Rafkin posing as a power company employee. He claims that the house is draining its power from all the others in the area, and Moss tries to get him to leave, but Arthur lets him in.

While the family explore the mansion, Moss tries to get Arthur to sign the inheritance papers and lay claim to the house, but Dennis impedes his signature and reveals to Arthur and Moss that he worked with Cyrus to hunt ghosts, adding that Cyrus owed him money. during the distraction, Moss slips away into the basement of the house to collect his payment while wearing spectral viewers. Along the way, he sees several of the imprisoned ghosts (including the the First Born Son and the Torn Prince), making a crass comment to the Angry Princess, who tries to attack him but is restrained because of the barrier spells keeping her contained. When Moss finds and takes his payment from at the core of the machine, he accidentally sets off a mechanism which activates the machine and seals up the house.

As Moss is making his way back up into the house, he is confronted by the Angry Princess, who seems annoyed by his earlier comment. She advances on Moss, but before she can retaliate, two sliding glass doors activated by the house snap shut through Moss, slicing him in half. 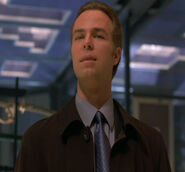