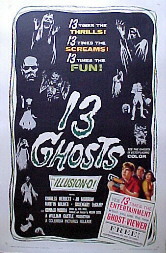 13 Ghosts is a 1960 horror film directed by William Castle and written by Robb White. To the dismay of some of the cast members, Castle gave top billing to 12-year-old Charles Herbert. It was remade in 2001 under the title of Thir13en Ghosts, directed by Steve Beck.

When occultist uncle Dr. Plato Zorba wills a huge ramshackle house to his nephew Cyrus and his impoverished family, they are shocked to find the house is haunted. Their new furnished residence comes complete with a spooky housekeeper, Elaine, plus a fortune in buried treasure and 12 horrifying ghosts.

His family soon discovers that these spirits include a decapitated man, a fully grown lion, a wailing lady and a flaming skeleton, who are held captive in the eerie house and must find an unlucky thirteenth ghost to free them. Dr. Zorba leaves a set of special goggles, the only way of seeing the ghosts, as well as a treasure of his fortune hidden somewhere in the house. However, there is someone else in the house who is looking for the money and is willing to kill for it.